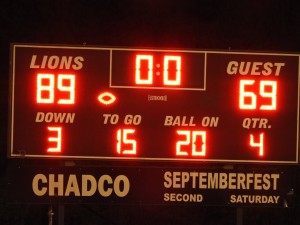 Check out the ten smallest Texas high schools (by enrollment) with football teams.

You know the big boys — the Allens and the Katys and the Abilenes and the Cibolo Steeles of the Texas high school football world.

Unsurprisingly, all of these schools play six-man football in the Class 1A Division II — the smallest classification in the UIL. In case you were wondering, the smallest 11-man football team is Rocksprings, which boasts an enrollment of 60 students.

10. Loraine and Welch Dawson
Enrollment: 35
Loraine is a town of 656 people way out in Mitchell County — about 60 miles west of Abilene on I-20 — while Welch is speck of a town about 50 miles southwest of Lubbock with a population of 222. Loraine’s been the more successful squad of this duo, reaching the Class 1A Division II state semifinals in 2014 and making the playoffs again in 2015.

8. Grandfalls-Royalty and Loop
Enrollment: 33
Go out to Odessa and go about 50 miles southwest and you’ll hit Grandfalls (population: 391), which shares a school with the unincorporated community of Royalty (population: 196). The school’s been all business when it comes to six-man football, winning the Division II state title in 2013.
Pretty much smack-dab between Lubbock and Odessa is Loop, Texas — which really actually isn’t a city. It’s more where two roads come together — Gaines County Road 303 and TX-83 — but they’re all about their Loop Longhorns out there.

6. Dell City and Rule
Enrollment: 30
Snuggled up next to the New Mexico border about 90 miles east of El Paso is Dell City, home of the Cougars and also 413 people. Here’s a fun fact about Dell City: it’s home to Paulville, which is a planned community entirely comprised of Ron Paul supporters. So there is that.
If you have heard of Rule, Texas — home of the Bobcats, about 55 miles north of Abilene — it is probably because of their most famous alumnus: Baylor coach Art Briles.

4. Harrold
Enrollment: 27
Way up near the Red River, about 35 miles northwest of Wichita Falls along US-287, is Harrold, which is technically an unincorporated area. A one-building school houses all grades, but every Friday night, they find their way to Ron Brandon Field (capacity: 400) to cheer on their Hornets.

3. Lohn
Enrollment: 26
Smack dab in the middle of Texas — McCulloch County, an hour drive east of San Angelo — is Lohn, with a population of 149. That’s 51 fewer people than their stadium (Eagle Field) will hold on a Friday night.

2. Benjamin
Enrollment: 25
The former holder of the title of Smallest Texas High School Football Team, the county seat of Knox County about 80 miles north of Abilene has a population of 258 and a school enrollment of 25. In 2015, the Mustangs made the playoffs for the first time since 2008.

1. Cranfills Gap
Enrollment: 24
About an hour’s drive northwest of Waco, between Meridian and Hamilton on Highway 22, lies the home of the Lions, with an enrollment of 24 and a town population of 281. The Lions haven’t had a winning season since 2010, but hope springs eternal in the home of the Smallest High School Football Team in Texas.